The Importance of a Great Mesh 3D Character in 2021

Whether you are developing a new game and got to the part of defining the characters or you have found yourself stuck when trying to create them, you just have arrived at the right place.

If you are new to all this world of designing 3D characters and you are eager to learn we highly recommend you check our post about the different softwares you can use when starting out. We know this may seem hard at first but we are here to help you learn more about 3D character design and everything that it entails. You probably already know this, but we would like to refresh this concept just in case before getting into the subject. A 3D mesh is the structural framework of a polygon-based 3D model.

3D character design begins with the blocking out of a character’s simple geometry, which is then turned into a complex and improved mesh. This is the most crucial step in the character development process because it has an impact on the rest of the steps (i.e. texturing, rigging and animation). And for beginners, this method can be time-consuming and intimidating. You can download and check here one of our basic free 3D characters 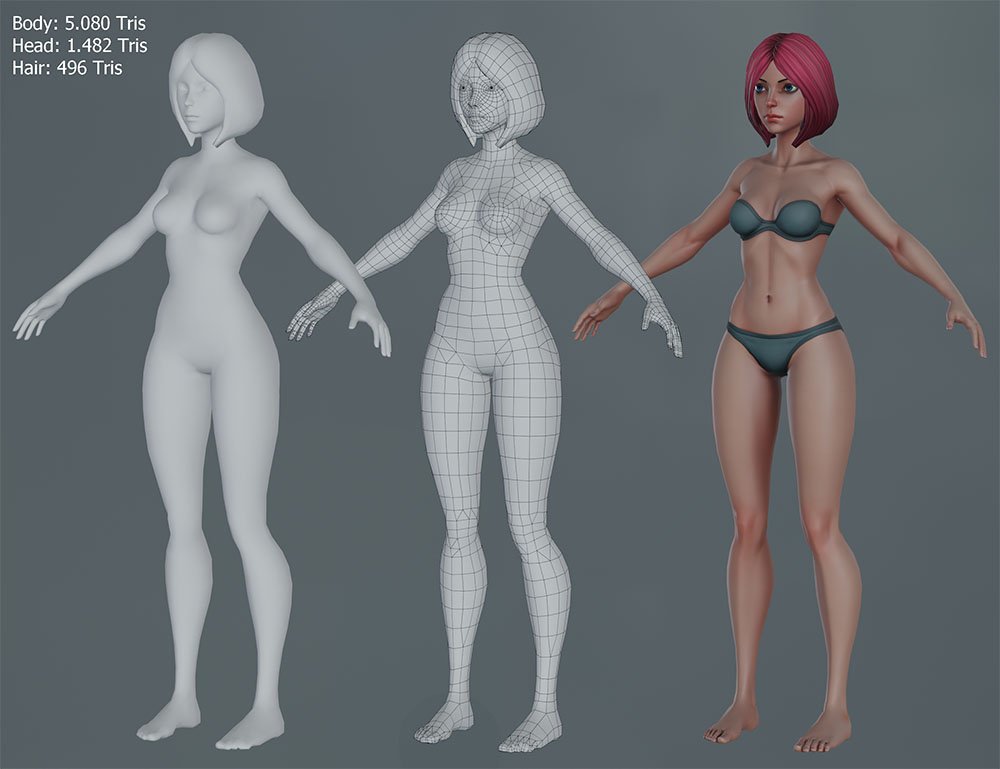 So, in this first step of modeling as we have just said it would start by blocking out the basic shape of a potential 3D character model’s body and face, as well as its skeleton and muscle frame. At this point, it’s quite important to have a basic understanding of human anatomy. Both photo realistic and stylized characters benefit from an understanding of overall unity and proportion. And hypertrophied types of stylized characters need all body parts to blend in and build the perfect overall effect.

Next stage would be sculpting the character. This is a process in which it’s built a 3D character that resembles natural clay using. This step is also a critical one regarding the development of photorealistic, hyperrealistic, and stylized 3D characters. Sculpting helps to achieve unprecedented levels of character specificity by incorporating features into meshes that would otherwise be difficult to create using standard 3D modeling techniques.

In order to achieve the proper 3D character model this will require strong retopology — the polygons must be properly and logically arranged and positioned to ensure the future animation performs correctly. Retopology also seeks to turn a high poly model into a model with an optimum number of polygons.

With this new retopologized mesh there would be no distortions or any other issues that plague free-sculpted 3D meshes. In addition, a low-poly model is therefore simpler to UV wrap than one that has many polygons.

In this phase, we will need to UV unwrap and bake a character model for textures and materials that comprise the final model’s surface.

After this we get to texturing which is a fascinating and creative step. At this point, the overall goal is to create a 3D character model that closely resembles its design or real-world version in any aspect, such as hair colour, scars on the face or body, clothing, and other distinguishing characteristics. Believability and appeal are determined by the overall proper display of a character, as well as micro elements such as the model’s relationship with light.

We now get to the part of animating the model,  this technique is called rigging. This mechanism entails constructing a skeletal structure that aids model animation by allowing the model to follow the skeleton’s structure. This method makes the animation process easier and increases output quality. Any 3D model that has been rigged with skeletal bones can be adjusted and altered as desired. Here you have good samples of our Rigged Game-Ready 3D Characters you can buy in our shop.

Many game engines, such as Unity and Unreal Engine, have automated rigging capabilities, manual rigging is an essential phase in game character modeling for proper animation.

The final step in the character development pipeline is animation. Now is the moment when you bring your 3D character to life, with facial expressions and body gestures. Each movement should represent the personality of the character.

As we had previously said, the groundwork for future animation of the character is laid during the rigging period, where it receives a bone structure that determines the character’s potential range of movements. A 3D animator must be familiar with the concepts of motion of humans, objects, facial expressions, and ultimately, be good at physics in order to create the right script and set the required parameters of motion in a program.

As you know game character development entails a great deal of experience and skills that have been developed over years of practice in diverse styles. An skilled artist can create a game character that is not only well-designed, but also unforgettable and captivating

For this reason, having a good 3D character mesh it’s as important as it is difficult. Because usually when building characters, things can get out of proportion, so it’s a good thing to have a base mesh to start with and then add specific features. Therefore you can find in our store base mesh characters already rigged so you can save time and that will help lay the foundation for the rest of the project.

If you want to bring a new promising game to life, in Y3DC Digital you will find excellent characters with which you can create their clothing or you can ask us to help you with a custom design of what you have in mind.